Bigfoot
The best known and most debated sighting is the Patterson-Gimlim Film. I found a video about the Patterson film that was an analysis by Bill Munns. Bill Munns goes into great detail on how he used a high definition camera to take a picture of the actual Patterson film itself. Munns took a picture of every single frame and put those pictures together to make the video clearer and more stable. Munns then goes on to explain his viewpoint and the evidence of what he sees.

Munns has a good background and does know what he is talking about. He was in charge of special effects, and designer for various movies involving replicating creatures for the movies and making them look life
like. Munns is also a computer animator so he knows what he is doing when he uses the computer to show the dimensions. He has also been studying Bigfoot for many years as a researcher. Munns’ background shows that he is more than capable of having good input on whether it was a hoax or not.

A site that I found had twenty of the top Bigfoot sightings some
maybe real and some maybe hoaxed but I found it very interesting to watch and read what the guy who created the page had to say. He went through every video and told you what to look for and explained what his thoughts were on the video. The creator of the page gives about three paragraphs on each of the videos. His “what to look for” paragraphs are interesting after watching the video. I found that watching the video first then reading the paragraphs were better so you are not biased to what you were seeing in the videos. The paragraphs are made to help you see what is in the video not to tell you what is in the video. This page is very interesting because it helps you find numerous Bigfoot sighting in
one spot instead of having to look everywhere for them. 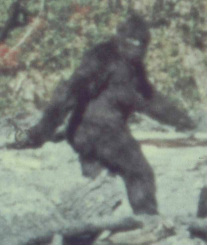 There are so many different conspiracies out there on the existence of Bigfoot but this was one of the first that I found and it caught my interest because the guy with the story took to social media to tell his story. He claims to have seen Bigfoot tracks down a road. They said there were more than a thousand tracks and decided they needed to tell someone. They told a Forest Service Supervisor and when they came back later the road had been misted down making it look like nothing was ever there. This story is interesting because it goes along with the conspiracy that the government is hiding Bigfoot. There are always going to be conspiracies until someone comes up with a body of a Bigfoot.

Along with the stories of conspiracies there are also a few stories that I came across. The Committee for Skeptical Inquiry’s (CSI) Rob Boston writes about a Bigfoot conference that he attended. In his writing he talks about a few stories but the one I found to be most interesting was about a lady, Janice Coy, whose grandfather found and injured Bigfoot and cared for it until its parents took it away. Her grandfather then began leaving food out for them, and they would come eat the food. Coy said she took the Bigfoots for granted because she saw them a lot. She goes on to talk about how they knew a few words and that the alpha male’s name was Fox. Boston says that her speech went on and talked about all the encounters she had with them. When she was asked if she had any evidence of this things she replied that she had a few photos but Boston says that they were of trees and shadows. She claimed that her best photos got lost in Wal-Mart and when she got her pictures back they were just white.

Her story is very interesting and would be made even better with solid evidence. There are other stories on this Boston’s page but Coy’s had that allure that you wanted to believe her and are skeptical of her
but with solid evidence her story might not just be a story to the people of the Bigfoot research community.

Here are links to the pages that I found the the information from.
http://listverse.com/2011/05/23/top-20-bigfoot-sightings/
http://www.cryptomundo.com/bigfoot-report/usfs-bigfoot-coverup/
http://www.csicop.org/sb/show/scenes_from_a_bigfoot_conference