Another major story in Cryptozoology is Bigfoot. There have been many alleged sightings, and photos, including this of a "burned Sasquatch " Look closely at where the "Sasquatch" meets the ground. 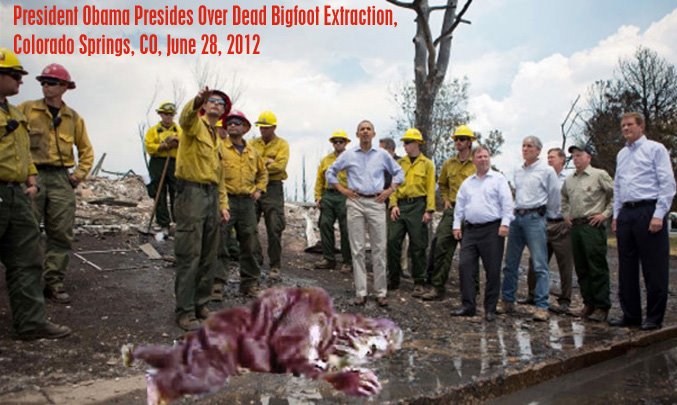 A very obvious photoshop  The internet is plagued with these photos and these "eye witnesses" of The Bigfoot, or a Bigfoot. When one scours the internet for a slightly reliable source of a Bigfoot conspiracy they are faced with a proverbial needle in a haystack. Most of the theories presented are on blogs or use photos as evidence, with obvious photo shops.


There happens to be a conspiracy going around that there is a Bigfoot or multiple living in the Mount St. Helen's area. There are many accounts of sightings in that area, also in Ape Canyon, named such because a man allegedly shot a Bigfoot and it fell into the canyon, there have been multiple reported sightings. This site tells of many accounts of Bigfoot sightings, photos, and different accounts of what it looks like and news articles.

There are many theories about where Bigfoot came from, some say its a product of government experimentation. Some say, like it this article, that Bigfoot is part of the genus Gigantopithecus. This article provided by the Bigfoot Field Research Organization, explains some of the theories of what Bigfoot really is, one of which being that Bigfoot is a descendant, or part of the remaining genus Gigantopithecus. The article goes on to explain how and why not many remnants are found in Northern  America, what is supposed to be the most popular place for this genus and for Bigfoot.

Then there are those that say that the government is not hiding Bigfoot because what would they have to gain from that? (page 112-113) The section of the book I reference is about the conclusions and theories that Richardson has drawn from his research, namely whether or not he thinks that the government has knowledge of the existence of Bigfoot and if that knowledge is being hidden. He also reviews the reasons that the government would hide it if they did have the knowledge.

There is also a lesser known conspiracy that Bigfoot is a part of the Mormon Mafia. Quite a stretch.